Is Debbie Tilley available?
On June 28, 1995, yes that was 15 years ago, my rep, Richard Salzman received a call from the art director at Gallaudet University Press. Is
Debbie Tilley available to do samples for an up coming project? We're going to be publishing a signing dictionary for children, needing
around 1000 illustrations.... and that's how it all started....

Fast forward 15 years:
On December 4, 2010, Richard, my rep received an email from the Editorial Director of Gallaudet University press, they were ready to get started
on the Children's Sign Language Dictionary! I think that is the longest lead time in freelance history! As it turned out, I had been illustrating children's picture
books nonstop for a long time. The thought of doing 1,000 individual drawings sounded so great to me, I couldn't wait to get started.......

The Little Ant That Could 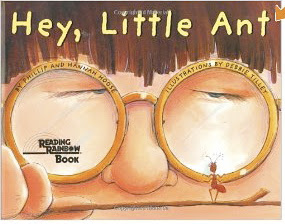 One of the picture books I've illustrated is called "Hey Little Ant".  For those of you who have written a children's book and never been able to get anyone to publish it, here's a little encouragement.  The man who wrote "Hey Little Ant's name is Phillip Hoose.  I believe he tried for ten years to get his story published.  He never gave up, when finally Tricycle Press agreed to publish it.  That was in 1998.  It's now been in print for 13 years, sold over 1,000,000, copies and is in something like 12 languages.  It is now an imprint of Random House and is soon to be an ebook.  That just goes to show you, if you really believe in your story, don't give up!

Posted by Debbie Tilley at 9:35 AM

Email ThisBlogThis!Share to TwitterShare to FacebookShare to Pinterest
Labels: 2011/04/22 The Little Ant That Could